After carefully avoiding any microcontroller in my doppler RDF designs, april 2015 I started this new project: an autonomous microcontroller based Radio Direction Finder.
This RDF should be able to use the doppler principle as well the amplitude principle, depending on the attached antenna array.

Let’s be clear about one thing first:
There’s no reason why a microcontroller based RDF would perform any better than a RDF built from simple digital and analog components.
Only the calculating possibility could give a modest advantage in signal interpretation and averaging of the outcome.
The biggest advantage however would be the user interface:
Using a graphic screen, much more data can be presented to the user in a very user-friendly way.
Menus could offer easy acces to the RDF’s settings, and user settings could be stored.
And, data could be offered to the outside world, shared in a network etc.

So these advantages inspired me to start this new approach.

In the following pretty bad Youtube movie you can see the first prototype in action on 424MHz in both an easy as well as a tough, reflective environment:

I used this RDF40 as a development platform as virtually all parameters are available via the menu structure.
Therefore it was -and still is- wonderfully suited for experiments with other antenna arrays and alternative software algorithms.

This has resulted in highly improved performance for mobile RDF work, since the software is capable of suppressing a lot of the multipath disturbances that are common in mobile work.
Additionally, the RDF can send its best bearings to a laptop that can display the bearing lines on a map.
This software is developed to be a powerful tool for mobile RDF work.

Now, after about 2,5 years of experimenting and testing I designed the RDF41, a simplified RDF processor with the best settings fixed in its firmware.
So now and then I build one or two RDF41’s for those who are interested.

So the data of all 4 antennas is stored in its own capacitor, which does some initial averaging. 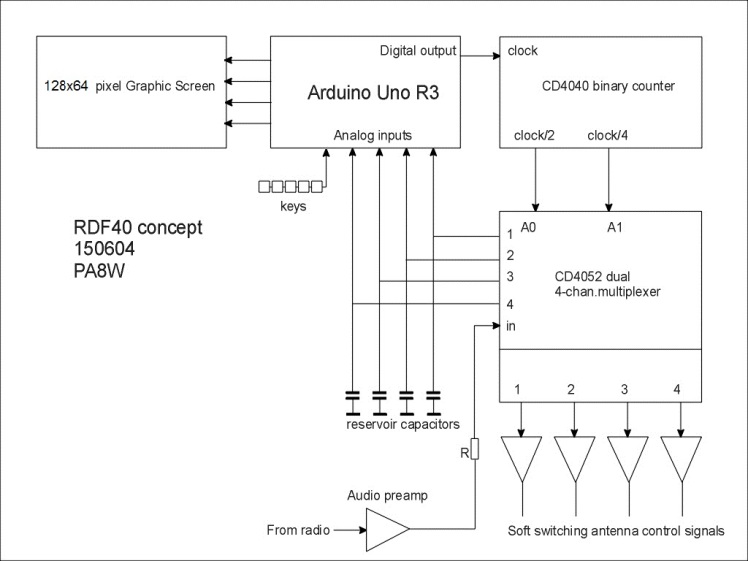 These four caps are read by the Arduino’s analog inputs, about 8 times per second.
The Arduino calculates the difference between X= and X-, and it does the same for Y+ and Y-. This gives an X and Y value without DC offset.

From this X and Y value the raw bearing estimate is calculated, and of course a lot of additional calculations are performed to calculate the credibility of the samples,

Put together, the three PCB’s form a compact sandwich.

Out of PCB material I made a temporary housing.
The five pushbuttons are on a separate small PCB in front of the screen PCB.
The pushbuttons provide quick and easy acces to all settings.

The picture shows is the main screen of the current version.

The down left corner shows the elevation indicator, for airborne targets.
Next to this indicator a simple vector scope shows the current value of the four antennas: X+, Y+, X-, Y-

The RDF does four measurements every half second.

The center dot in the pelorus indicates that a measurement was good enough to be accepted. This total approach gives a quick and very good impression of bearing and reliability of measurements.

All menu changeable settings are stored in a non volatile memory,
and will be remembered next time the RDF is powered up. 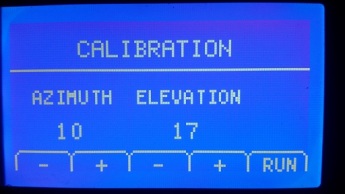 A setting of 64 will generally do fine in a mobile setup. 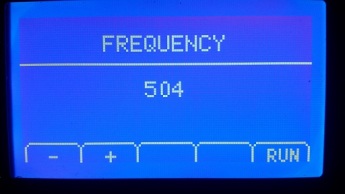 Running from 0 to 9, the squelch setting is the  minimum Q factor the sample must have to be valid.
A sample with a Q below the squelch setting will be ignored, and the dot in the center of the pelorus will disappear, to indicate that no fresh data is accepted and the Azimuth indicator is frozen.

The samples Q value is calculated out of signal magnitude (doppler amplitude) plus the samples symmetry: A multipath doppler tone may be quite loud but will be not very symmetrical.
Therefore the symmetry is a good indicator for the reliability of the sample.

A complicated algorithm is used to combine both amplitude and symmetry into
a single quality rating figure “Q”, which is also displayed in the pelorus. 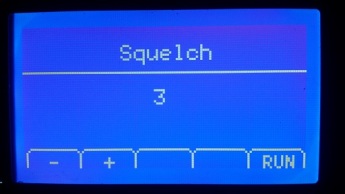 Measurements indicate that the RDF itself has an accuracy within 2 degrees.
The antenna array however is not taken into account here.
A 4-antenna doppler typically has an accuracy of around 5 degrees in good circumstances.

Anyone who has been driving around with a RDF in a city or industrial environment will know that ideal circumstances can be far, far away…